The UK lawyer and journalist David Allen Green has a series of tweets in which he offers his suggestions for places to look/people to follow for information about Brexit.  It’s presented here ‘without comment’ 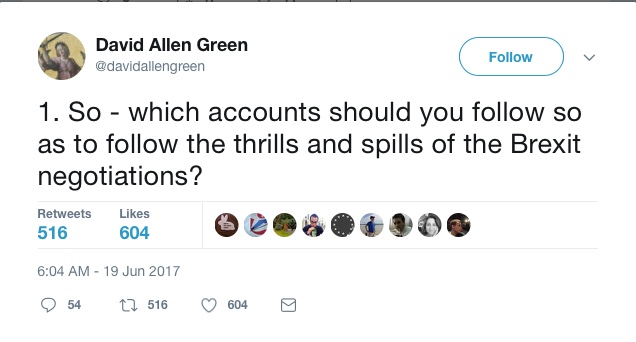 1.  So – which accounts should you follow so as to follow the thrills and spills of the Brexit negotiations?

2. Having followed Brexit for a year, there is a broad hierarchy of sources of useful reliable information.

Without snark, as follows.

3. The most reliable information on Brexit will come from the EU institutions.

Unfortunate for UK, but sadly true.

4. This is the page of the EU negotiation team:

5. The official EU commission account is @EU_Commission. But @MichelBarnier and (especially) @WeyandSabine are the ones to follow.

6. The latter is the EU’s deputy chief negotiator, and her RTs. tweets and likes are interesting and indicative.

7. Most of the EU key documents will be posted speedily and will be available in plain sight.

8. After the EU, the best sources are certain journalists. (You will see UK government will be further down this list, at number

9. In particular, peerless @alexebarker. If did not write for FT, I would subscribe for his stuff on Brexit. Also @ftbrussels generally.

11. (Apologies to those missed off, but I will RT their good stuff as well. Some outstanding Brexit journalism out there.)

12. The third best source for information on Brexit is, oddly, the UK parliament (not the government).

14. And various Commons and Lords committees have also provided outstanding reports. Both @CommonsEUexit and @LordsEUCom should be followed.

15. With parliamentary reports, the detailed oral and written evidence is also posted and always worth looking at, not just the reports.

17. And fifth and last, comes the UK government, which is woeful on providing reliable Brexit information. But for completeness, @DExEUgov.

18. For commentary rather than than information, I am sure you all have your preferred sources. But this thread not about commentary.